‘Baloch facing genocide in a city they established’ 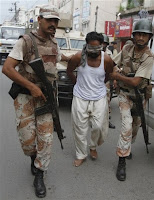 The impoverished Baloch people were facing genocide in a city they themselves established hundreds of years ago, said Abid Hussain Brohi, chairman of the Baloch Ittehad Tehreek.
Speaking at a news conference at the Karachi Press Club (KPC) on Thursday, he pointed out that if one saw Karachi in its historical perspective it were the Baloch who laid the foundation of this city, but today they were being pushed to the walls.
Responding to a question, he said about 100 Baloch were missing in the city, and their bodies in gunny bags were being dumped in various areas of the metropolis.
http://www.thenews.com.pk/TodaysPrintDetail.aspx?ID=64676&Cat=4
Posted by baloch at 6:10 PM