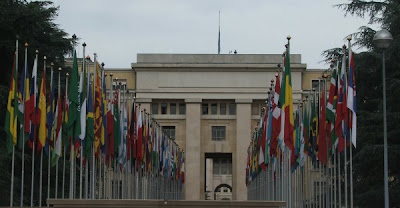 PRESS RELEASE FOR IMMEDIATE RELEASE
Demonstration hosted by the Unrepresented Nations and Peoples Organisation (UNPO) and the Baloch Human Rights Council, to protest against the increasing number of human rights violations in Balochistan, Pakistan.
Thursday, 15 September 2011
Geneva, Palais des Nations ‘Broken Chair Square’
On Thursday 15th of September Baloch human rights defenders will congregate at the 'Broken Chair' outside the Palais des Nations between 10am and 12 noon to protest against the number of enforced disappearances of Baloch political activists and human rights defenders in Balochistan.
This demonstration will raise awareness of the alarming number of enforced disappearances, extrajudicial killings and arbitrary detentions that have been reported by Human Rights Watch, Amnesty International and the Human Rights Commission of Pakistan and prompt the international community to act.
Key people expected to attend this protest include former Senator of Pakistan, Senator Sanaullah Baloch of Balochistan National Party, who served as a Member of the Senate of Pakistan between 2003-2008 and as a Member of the National Assembly between 1997-1999, and Mr Noordin Mengal, prominent figure in bring Baloch human rights issues to international forums.
Balochistan National Party strive for Baloch National right to self-determination through non-violent, peaceful and democratic means and Baloch Human Rights Council is a non profit charitable organisation solely dedicated to highlight human rights abuses in Balochistan.
The demonstration is to take place before a parallel event at the 18th Session of the UN Human Rights Council entitled ‘Climate of Fear: Enforced Disappearances, Extrajudicial Killings & Arbitrary Detention in Balochistan’. This parallel event will be co-hosted by UNPO and the Society for Threatened Peoples, and will take place between 12:00 and 14:00 at the Palais des Nations in room XXIII.
For More information on this event visit http://www.unpo.org/article/13151
Note to editors
The Unrepresented Nations and Peoples Organization (UNPO) is an international, nonviolent, and democratic membership organization founded in 1991. Its members are indigenous peoples, minorities, and unrecognised or occupied territories who have joined together to protect and promote their human and cultural rights, to preserve their environments, and to find nonviolent solutions to conflicts which affect them.
For any queries please contact
UNPO Secretariat
Tel.:+31(0)70 3646504
Fax: +31(0)70 3646608
Laan van Meerdervoort 70
2517 AN The Hague
The Netherlands
unpo@unpo.org
Posted by baloch at 6:35 PM