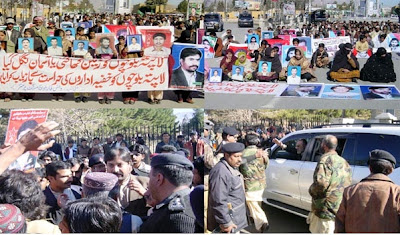 QUETTA: The relatives of Baloch missing persons have been threatened to end their hunger strike camp set up outside the Quetta Press Club, confirmed Qadir Baloch, father of missing Baloch Republican Party (BRP) leader Jaleel Raiki.
Talking to The Express Tribune, Qadir accused the government functionaries and a pro-government organisation of sending him threats through cell phone and by visiting his residence and hunger strike camps.
“We had set up this camp about one and half year ago which is the sole platform for the relatives of missing persons to raise their voice. Families from far-flung areas come to register their protest,” he said.
He said that two men had visited the camp and asked to him to end the strike. “He told me if I want my son alive then I must end the strike. I argued that if you people release all the missing persons then we will end our strike.”
Qadir said he had a list of those missing persons whose relatives are on strike.
http://tribune.com.pk/story/275866/baloch-missing-persons-relatives-receive-threats-to-end-strike/
Posted by baloch at 4:08 PM