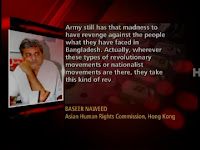 Hong Kong, October 24: As the Baloch National Movement for liberation gains momentum, atrocities by Pakistan army against Baloch political leaders, students and intellectuals are on the rise. The Hong Kong-based Asian Human Rights Commission said in a report that 206 missing persons had been extra judicially killed in Balochistan in the past 15 months. The study done from August 2010 says that not a single day goes by without an extra judicial killing in the province.
Watch Video report:
http://www.youtube.com/watch?v=lm7TMDhOv8g
Posted by baloch at 11:25 AM