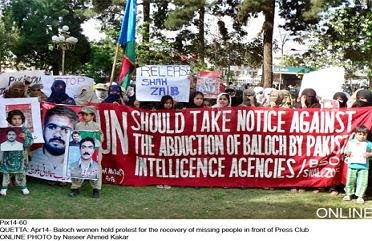 Occupied Balochistan: Four Baloch youth, including a Levis officer, have been abducted by Pakistan securityagencies from Pasni town of Balochistan. According to sources, around fifteen security forces personnel came in two official vehicles and abducted the four youth near a police check point in the Jaddi area of Pasni town's Ward number 7. Eye-witnesses said the men were abducted at gunpoint before the eyes of police. The police only resisted when the armed officials tried to abduct a Police ASI.

The abducted men have been named as Hakeem S/O Pandok of Rekposht Pasni, Saddam S/O Munshi Akhtar of Ward number 5 Pasni, Yad Baloch of Pasni and Mohammd Ali Jamot a residence of Sindh. The cause of their abduction is not known, however, eye-witnesses and police have confirmed that the abductors were driving official vehicles.
http://www.crisisbalochistan.com/secondary_menu/human-rights/four-baloch-youth-abducted-from-pasni-operations-continue-in-dera-bugti-other-regions-of-balochis.html
Posted by baloch at 5:16 PM