Pakistan's Terror Problem is Beyond the Taliban 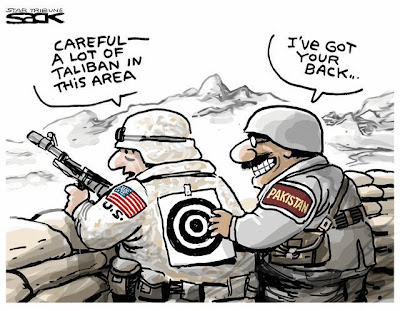 Since the fall of the Taliban in 2001, Pakistan has followed a destructive policy towards its neighboring country in order to achieve four aims:
Firstly, to use the war on terror as a camouflage for Pakistan's own internal wars: a communal war in Karachi, a separatist war in Baluchistan and a war against the Pakistani military in the Pashtun tribal area.
Secondly, to entrap Afghanistan into Taliban's ideological straitjacket. Pakistan's covert backing of the Islamic militants, dragged out the Afghan war too long and inflicted massive Afghan and Western casualties.

Thirdly, to use the Afghan Taliban as a free army for suppressing Pashtun and Baluchi nationalism within Pakistan.
Fourth, as part of its contingency plan to use the Taliban against India.Worse still, beyond harboring and steering the Taliban, Pakistan continues to nurture a highly contagious religious ideology that generates and appropriates violence and terrorism against the West and Muslim opponents. The Pakistani military and its spy agency sees this ideology as Pakistan's only survival realpolitik. Anyone who dares in Pakistan to reveal links with ISI and terrorists faces an immediate elimination. The Wall Street Journal reporter, Daniel Pearl, is a classic example.http://www.huffingtonpost.com/ehsan-azari/pakistan-terrorism_b_1019255.html