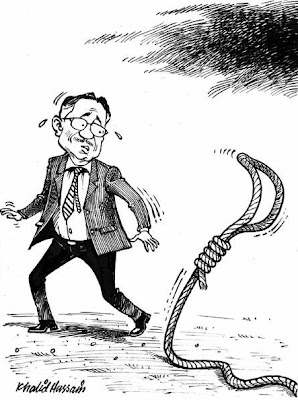 QUETTA, (SANA): The Chief Justice of Balochistan High Court expressing anger at the team investigating team of Nawab Akbar Bugti murder has questioned why warrants of former president gen (retd) Parvez Musharraf have not been issued?
On the other hand, the statements of former interior minister Aftab Ahmed Sherpao and former governor Balochistan Awais Ahmad Ghani were presented in the court.
The proceeding of Akbar Bugti murder case was conducted by two-member bench headed by Chief Justice Balochistan Justice Qazi Muhammad Faiz Esa and comprising of Justice Muhammad Hashim Kakar here on Wednesday.
During the proceeding Aftab Sherpao and Awaz Ahmad Ghani statements were presented before the court and said that they are ready to face the murder case; meanwhile they said that they are not involved in the Bugti murder case.
They said that the Akbar Bugti murder operation was conducted by Pakistan army and they become aware about the murder through press.
Aftab Sheparo in his statement said that armed forces are not sub-ordinate to interior ministry and the Balochistan Government itself had called the army to control the situation in the province.
Chief justice asked why the warrant arrests of Parvez Musharraf, Aftab Sherpao, Awais Ahmad Ghani were not issued.
http://www.sananews.net/english/2011/10/why-arrest-warrants-of-musharraf-not-issued-in-bugti-killing-case-cj-bhc-questions-from-investigation-team/
Posted by baloch at 6:13 PM