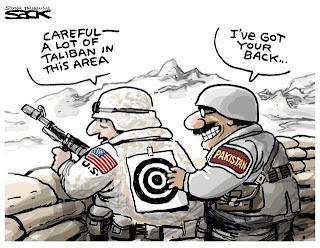 Pakistan's real Hippocratic face is coming to surface. Pakistani state terrorism is ongoing  in Balochistan. Pakistan has abducted, tortured and extra juicily killed more then 600 Innocent Baloch civilians since July 2010. Its 5 th army operation is going on in throughout Balochistan. More then 2 hundred thousands of Baloch have been displaced from Bugti & Marri areas. While Baloch areas in Karachi such as Lyari & Malir are under sieged by Pakistani security forces since 1st April where the livelihood of ordinary people have been made hell. While 400  worlds most dangerous Jihadi thugs are freed in a notorious jail without any real resistance. Talibans have also geared up their attacks in Afghanistan in the recent days with the help of ISI.
It is high time that international community take notice of Pakistani evil design of terrorizing innocent Baloch and the civilized world. Pakistan with its notorious ISI should be dismantle there by freeing the people of Balochistan, Sindh and Pakhtunkhwa from the slavery of Punjab for the sake of regional and world peace and prosperity.
Almost 400 prisoners have escaped from a prison in Pakistan after it was attacked by Islamist militants.  http://www.bbc.co.uk/news/world-asia-17718010
Armed Islamists attack jail in north-western town of Bannu, allowing almost 400 prisoners to escape  http://www.guardian.co.uk/world/2012/apr/15/pakistan-militants-free-prisoners
Posted by baloch at 10:25 AM