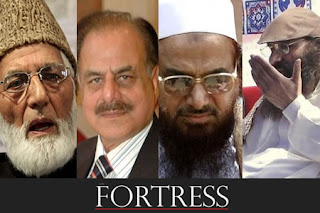 ISI 's proxies Jihadi fundamentalists have arrived in Balochistan to make a cheep show on thursday to fool themselves by pretending to Save Islam (Punjabi version) and Punjabi hegemony over secular Baloch nation. These jihadi thugs have never spoken for the Baloch rights and against the barbaric brutalities of Pakistani army since the illegal occupation of Balochistan in March 1948. They have been silent while more then 600 innocent Baloch civilians have been abducted, kept in solitary confinement and tortured to death ie extra judicially killed by Pakistani army and its agencies since July 2010. They have been silent partner in the Pakistani state terrorism and genocide of Baloch nation in Balochistan. The liberal secular Baloch Nation have always rejected them, also condemned  their hypocrisy  and will always defend themselves against evil designs of Pakistani states policy of converting Baloch society  into  talibanisation.
These lunatics have been woken up by the ISI  and  have been instructed to hold rally in Balochistan after the 3 US Congressmen tabled a resolution for self determination to Baloch people and freedom of Balochistan. Islam has all of sudden penetrated or burst in their guts as Baloch national struggle is getting momentum in the world arena and civilised countries are sympathising with the Baloch nation for the heinous crimes against humanity  committed in Balochistan by Pakistan.
Pakistan's notorious  agency ISI has used these Islamic extremists as a tool to use Islam to suppress the genuine people of the soils like Baloch, Sindhies and Pakhtoons. Pakistan has also betrayed the international community by creating safe heavens for Talibans &  Al-Qaeda where they are well trained , fully equipped and helped cross the border to Afghanistan to kill allied forces. One of the main purpose of this rally is also to destabilise Afghanistan by stopping  supply line to NATO forces in Afghanistan. These ISI mercenaries  are not only the enemy of the Baloch but of civilised world and humanity.
Therefore we request the international community Particularly US, UK, EU,  to support the secular democratic Baloch  people to fight and defend humanity against these terrorists and thereby support the genuine Baloch national struggle for  free sovereign Balochistan to end regional and international terrorism. Due to the geopolitical status of Balochistan a sovereign democratic Balochistan will end the hegemony of Pakistan and its ISI black mailing to the civilised world and will guaranty the regional and world peace, and prosperity. @Baloch Human Rights Council (BHRC)