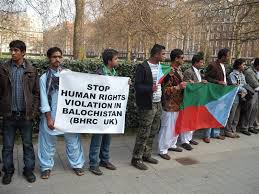 The Chief Justice of Pakistan Mr. Justice Ifthakar Mohammad Chaudhary and the Inspector General of the Frontier Corps (FC) Balochistan, Major General Ubaidullah Khan engaged in a fascinating conversation on Monday during the ongoing hearing of the Supreme Court of Pakistan on the issue of the missing Baloch persons. It is too premature and simplistic to hope that the ongoing hearing will lead to the release or recovery of all the missing persons in Balochistan. But such conversations, which should have ideally started as early as 2004, are a healthy and positive development. Monday’s hearing showed how security forces had mismanaged Balochistan for almost a decade. They committed all illegal acts and easily got away with it because of the absence of  a culture of accountability.
http://www.thebalochhal.com/2012/05/editorial-crucial-conversations/
Posted by baloch at 3:04 PM