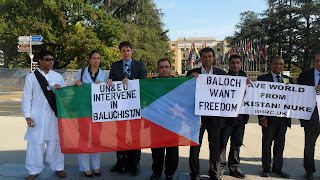 ISLAMABAD:
All eyes are now on the Frontier Corps, as more and more fingers, however reluctant, are pointed towards them in ‘missing’ persons’ cases. A two-member bench of the Supreme Court, hearing a case on missing persons, was informed by the police on Friday about a video showing the alleged involvement of the FC in missing persons’ cases in Balochistan.
DIG Operations Balochistan Police Hamid Shakeel informed the court of the existence of CCTV footage of a private hotel, where an FC vehicle picked up three missing persons. The bench ordered him to present the video before it and warned that on failure to do so, the corps commander would be summoned.
http://tribune.com.pk/story/377688/enforced-disappearances-pressure-builds-on-fc-in-missing-persons-cases/
Posted by baloch at 6:38 PM