Baloch people have a right to self-determination: US lawmaker 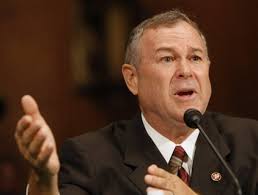 Voicing concern over the alleged human rights violations in Pakistan's Balochistan province, a top US lawmaker has said that Baloch people have a right to self-determination. "This abysmal human rights record of the Pakistani government is shameful. It is even worse because American foreign and military aid contributes to strengthening the security forces which kill innocent Balochis. The Baloch people have a right to self-determination and not to live under the control of Islamabad, if they choose," Congressman Dana Rohrabacher said in his remarks in the US House of Representatives on Friday. He told the House that the ethnic Baloch people live in an area of South Asia now claimed by Pakistan, Afghanistan and Iran. "In Pakistan in particular, they comprise an important segment of the population and live in the least developed province, despite an abundance of natural resources."
"Baloch aspirations for independence have been checked by force and their basic human rights have been denied by the Pakistani state. The Pakistan government and military is dominated by members of the Punjab ethnic group," he said. Rohrabacher said the first major Baloch uprising occurred in 1973 and was crushed two years later.
"The Baloch again resisted their Pakistani Punjabi occupiers by force beginning in 2005. A low-level insurgency continues to this day. Pakistan's elite refuses to release their grip on the strategic coastline or the natural riches of Balochistan which they and their ally, Communist Chinese exploit," he said."Pakistan's security services, which are overwhelmingly made up of Punjabis, use violence against civilians to intimidate the Baloch population. One particular grotesque method of intimidation is called 'kill and dump'," he claimed.
http://www.indianexpress.com/news/baloch-people-have-a-right-to-selfdetermination-us-lawmaker/1007069
Posted by baloch at 4:39 PM