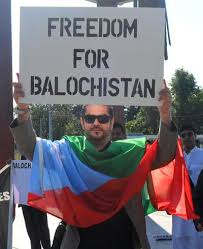 GENEVA: Balochistan’s unofficial representative to the United Nations Mehran Baloch has alleged that the restive province is being “Talibanised” by the establishment to further religious and ethnic divisions to weaken the nationalist and progressive forces.
Baloch was speaking at a seminar he organised here on Thursday at the Palais Des Nations, the UN Human Rights Council (UNHRC) headquarters, which was attended by a large number of human rights campaigners, NGOs and delegates from various countries.
At least three senior UNHRC representatives attended the seminar as observers but they did not take part in the discussion on Balochistan situation. The speakers included Tarek Fateh, a left-wing commentator from Canada, Dr Charles Graves, ex-Member of European Parliament (ex-MEP) Pablo Casaka, Zafar Baloch, Noordin Mengal and Baseer Naweed of the Asian Human Rights Commission.
Baloch said that UN Working Group on Involuntary Disappearances in its recent visit to the country had its work “extensively obstructed by the authorities, at time on the pretext of security and sometime there was no security for them”.
He alleged the working group members were told their visit was not necessary and “every trick was used to disrupt their work so that to hide the real nature of the atrocity that exists”.
Speaking on the spike in sectarian violence in the province, Baloch said: “The Talibanisation of Balochistan targets the most vulnerable sections of Baloch society, namely the women and religious minorities. The relentless killings of Hazara are a burning issue of our times and it exposes the true face of those who have forever promoted hatred on sectarian and ethnic lines to help their agenda of subjugating the masses.”  http://www.thenews.com.pk/Todays-News-2-133135-Balochistan-being-Talibanised-UNHRC-told
Posted by baloch at 3:24 PM