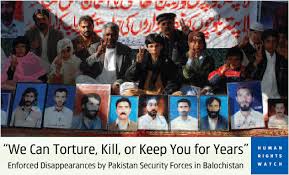 (Reuters) - U.N. experts urged Pakistan on Thursday to investigate allegations that security forces had abducted hundreds of people and take steps to hold powerful intelligence agencies to account. The remarks are likely to irritate the military establishment in Pakistan, where Western allies mostly avoid making public statements over the disappearances for fear of antagonising generals who exert huge sway over foreign policy. The first U.N. team to visit Pakistan to collect testimony from relatives of the missing concluded its 10-day trip by saying Islamabad needed to make sure suspects within the security forces could be prosecuted. "Even though Pakistan may recognise that some disappearances have occurred, not a single perpetrator has been convicted," said Olivier de Frouville, who chairs a Geneva-based U.N. panel that monitors allegations of state-sponsored disappearances around the world. "They should really fight against impunity."Pakistan's intelligence agencies have long resisted oversight by civilian governments in a country that has experienced long periods of military rule. The military has repeatedly denied involvement in abductions.The French law professor said the Pakistan government should take steps to ensure it could exercise transparent oversight over the intelligence agencies and that military personnel suspected of abuses are tried in civilian courts. "The state has to take some measures - and show that these measures are being taken - to supervise the work of these (intelligence) agencies. It has to be visible," he told reporters. http://uk.reuters.com/article/2012/09/20/uk-pakistan-disappearances-idUKBRE88J14620120920
Posted by baloch at 11:03 AM