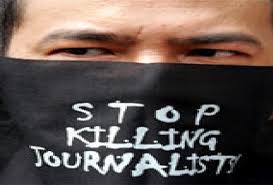 QUETTA: Khuzdar town descended into grief and sadness on Friday after the second son of Khuzdar Press Club president Nadeem Gurgnari succumbed to bullet wounds received in an attack on Thursday.
Unidentified armed men had opened indiscriminate fire on the sons of Nadeem Gurgnari at Eid Gah area of Khuzdar, on Thursday. Siraj Nadeem, who was eldest of the two brothers had died on the spot, while Manzoor had sustained critical injuries.
Manzoor was immediately taken to the Combined Military Hospital in Khuzdar for treatment. However, on Friday he succumbed to his injuries and breathed his last. The murder of two young brothers has saddened Khuzdar town. Khuzdar is one of the most restive districts in the violence marred province. Unrest in the area has taken lives of two presidents and one general secretary of the Khuzdar Press Club who was wounded in a firing attack, passed away on Friday.
On September 29, a reporter associated with Ary Abdul Haq Baloch was gunned down.
http://tribune.com.pk/story/457243/second-son-of-president-khuzdar-press-club-passes-away/
Posted by baloch at 1:23 PM