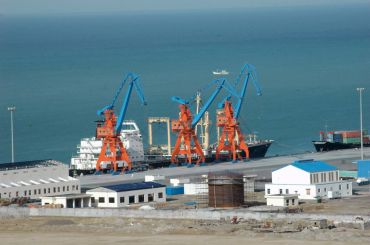 The Pakistani authorities are hoping that the Chinese agreement to take over the operation of the Gwadar port could act as a deterrent to India [Images ] whom they suspect of helping the Baloch freedom-fighters, notes B Raman. Despite its continuing concerns over the freedom struggle of the Balochs which shows no signs of letting up, China, which originally constructed the languishing commercial port of Gwadar on the Mekran Coast of Balochistan, is reported to have agreed in principle to take over the responsibility for the operation of the port.
The 40-year-old contract awarded by the Pakistan government in 2007 to Singapore’s PSA international for the operation of the port has been a non-starter due to disputes between the Pakistan Navy and the PSA International over the free transfer of land to the PSA international for the construction of warehouses for containers and other infrastructure facilities. The failure of the Pakistani authorities to improve the road and rail connectivity of the port as promised in the contract has also been a factor
.http://www.rediff.com/news/column/pak-inducts-china-into-balochistan-to-counter-india/20130201.htm
Posted by baloch at 3:20 PM