The Balochistan conflict has caused too many casualties 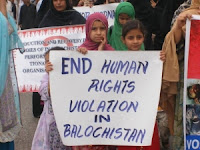 The Balochistan conflict has caused too many casualties. The military, in its many operations against the separatists, has made a habit of killing and abducting anyone suspected of being a separatist. Where the dispute arises is over just how many people are “missing”, a euphemism for being held by the military. A judicial commission looking into the matter puts the number at 621, while Baloch nationalists claim that the figure is closer to 23,000. We do not know which figure is accurate since we have no idea how many people have been picked up by the military. None of this, however, changes the fact that not a single person should be illegally detained by any government entity. On top of that, the bodies of two men who have gone missing from Balochistan showed up in Karachi, an occurrence that has become all too frequent. The judicial commission on Balochistan has been a useful venue for airing out grievances and showing just how much the military is hated by nationalists for its suppression of the Baloch.    http://tribune.com.pk/story/519123/missing-persons-4/
Posted by baloch at 7:46 PM