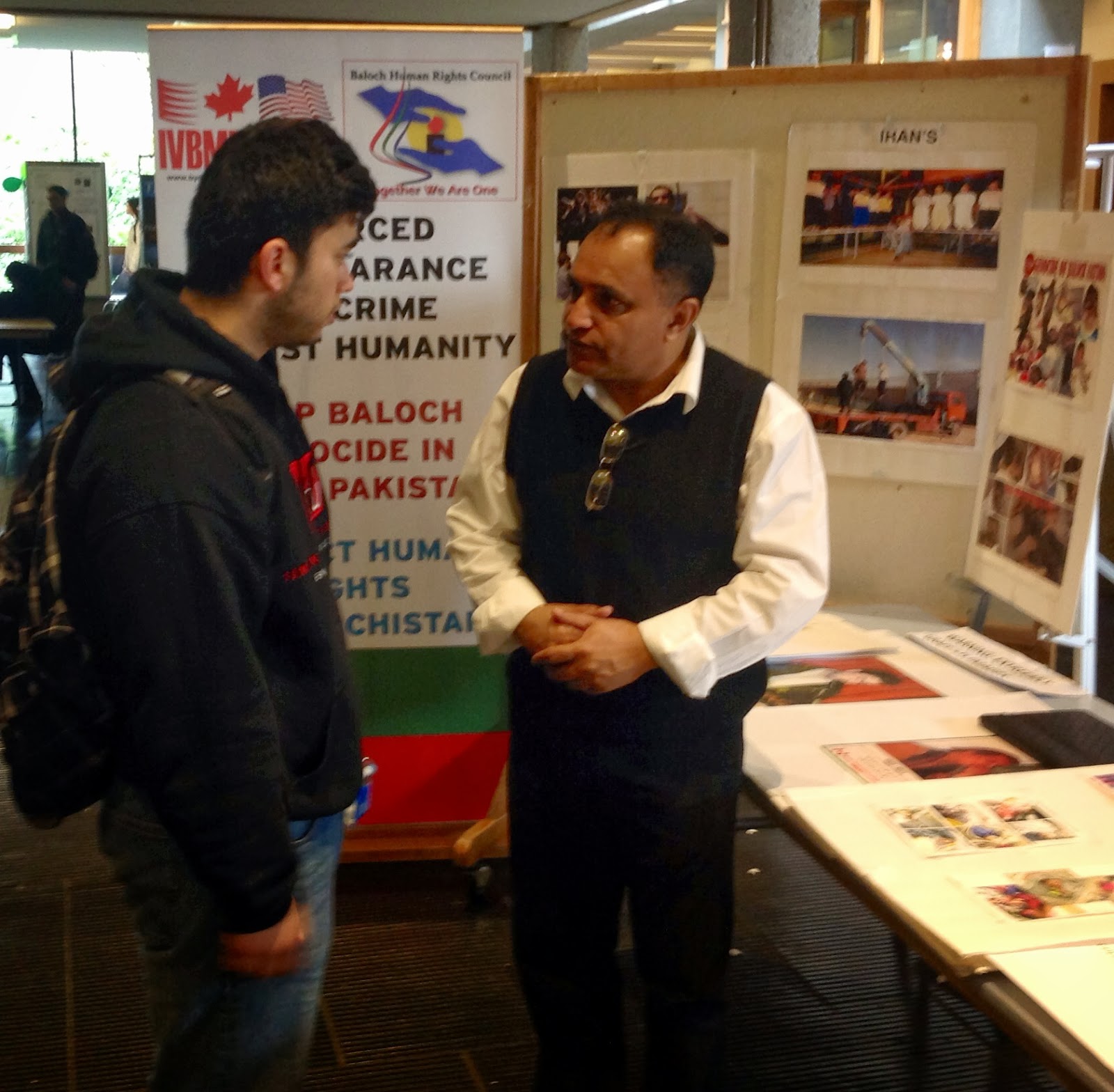 Vancouver, January 17, 2014 – International Voice for Baloch Missing Persons (IVBMP) and Baloch Human Rights Council (BHRC) of Canada held a successful human rights awareness campaign at the Simon Fraser University to highlight the cases of enforced disappearances, extra judicial killings of Baloch political activists by the Pakistani security forces in Balochistan.  The event at the SFU is part of a wider international campaign to cultivate awareness and support for the historic long march led by the Balochistan-based Voice for Baloch Missing Persons (VBMP) to draw attention to the cases of thousands of disappeared Baloch youth and the dumping of their tortured, mutilated bodies in the fields following their illegal confinement and in-custody executions. VBMP is a non-profit advocacy group founded by the families of the victims of enforced disappearances in Balochistan, where the Pakistani state security forces are conducting a brutal campaign of scorched earth policy to suppress the rights and freedom movement of the Baloch people. The event at the SFU drew attention of Canadian rights groups, students and the teaching staff to the grave human rights violations and Pakistani state atrocities committed against civilians in Balochistan under the so-called civilian democratic government. Canadians were appalled at the extreme brutality of Pakistan Army and their proxy death squads exposed through the display of photographs of the tortured, mutilated bodies of innocent civilians dumped after extra-judicially killed in custody. Many of the participants offered their support for the families of the missing persons and to those who are still in illegal confinement of the Pakistani state forces. Baloch students at SFU distributed a pamphlet Support Human Rights: Save Humanity, which explained about the 3,000 kilometer-long VBMP historical march, led by Abdul Qadeer Baloch, 70, Vice President of the organization and father of Jalil Reki, illegally abducted and killed by the Pakistani security forces. They described to the participants the importance of the ongoing long march that started from Quetta, capital city of Balochistan and is currently proceeding to Islamabad. After years of campaigning for the freedom and justice for their loved ones, family members of the victims of force-full disappearance and extra-judicial killings have taken the long journey to seek attention of the U.N. and the International Court of Justice following the complete failure of the Pakistani judicial system and law-makers to deliver justice. Participants of the long march include women and children; mothers, sisters, daughters and sons of the victims of state atrocities.

Aziz Baloch, the main organizer of the event, informed the participants about the most recent terrifying incident of illegal abduction, torture, and in-custody execution of 10-year old Chakar Baloch, a grade four student of Turbat, Balochistan. Chakar was picked up by the Frontier Corps soldiers from a street corner in full view of witnesses on January 7, 2014. He was kept in illegal custody, brutally tortured and executed by the state forces to spread fear and intimidation among the local populace. His tiny, mutilated body with visible signs of extreme torture was then dumped in the open on January 10, 2014 for public display. It is noteworthy that the abduction and the extra-judicial killing of Chakar Baloch took place in Turbat city, the hometown of Balochistan’s “middle class” provincial chief minister, Dr. Abdul Malik Baloch. In the same week of this tragic incident, the Pakistan Army raided the student’s dormitory in Turbat and confiscated books on Balochi literature, history and biographies of world famous figures such as Mahatma Gandhi and Nelson Mandela. Several Baloch students were taken into custody for the crime of possessing and reading “subversive” literature; educating youth on liberty, racial discrimination, and colonialism. This shameful act by the state forces exposes their willing partnership in the printing, distributing, and indoctrinating hate-mongering sectarian, religiously discriminating literature to the young minds for the spread of Talibanization. At the conclusion of the event, Aziz Baloch thanked the students and staff of SFU for their keen interest and show of support for the VBMP long march and the families of the victims of Pakistani state atrocities in Balochistan. He stated that the awareness campaign for support of human rights in Balochistan shall continue at other venues including University of British Columbia.
Aziz Baloch,
Coordinator, IVBMP (Canada)
Vice President, BHRC (Canada)