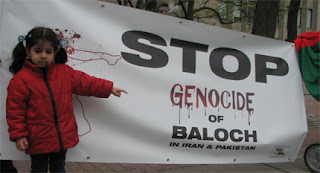 Press release
BHRC (Canada) Protests Pak Nukes in Toronto and Vancouver
Toronto, May 27, 2011 – Toronto and Vancouver chapters of Baloch Human Rights Council (Canada) staged demonstrations in front of the U.S. Consulates today to protest the 13th anniversary of Pakistan’s nuclear tests in Balochistan back in 1998. In a press statement released from the BHRC’s central office in Toronto, the organization’s leaders declared the N-tests a black day in the history of Baloch nation and a threat to world peace.
The demonstrations held in Toronto and Vancouver, the two major cities of Canada, were jointly organized by Baloch Human Rights Council (Canada), International Voice for Baloch Missing Persons (IVBMP), and the International Centre for Peace and Democracy (ICFPD). The participants in the demonstration came from all walks of life, particular the Baloch Diaspora, Kashmiris, Sindhis, and the progressive and secular elements in society.
Kindly click on the link below to read the full press release
https://docs.google.com/document/d/1Fu_46wBb9NMuMYHXrhSt34QTn2kWTOCTeMR-6w9iBmY/edit?hl=en_US&authkey=CIj-tpYI&pli=1# 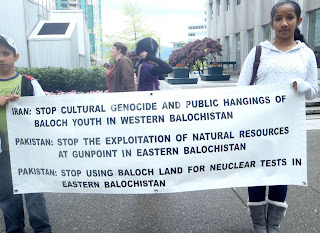 For more pictures of the event please click on the link below,
http://www.facebook.com/media/set/?set=a.168106066584781.47301.153593348036053
A memorandum was submitted to US consulates
Your Excellency,
Today, we have gathered here to protest the 13th anniversary of Pakistan’s nuclear tests in Balochistan. A series of nuclear tests were conducted on May 28 and May 30, 1998 in the Chaghai hills of Balochistan, resulting in the displacement of thousands of Baloch nomadic tribesmen and environmental pollution of the virgin lands. The inhabitants were never compensated for their loss of land, livestock, and livelihood. Reported cases of radiation sickness, skin and blood cancer, birth defects, and respiratory problems are completely blacked out in the Pakistani media and treatment was denied for the ailments caused by the nuclear tests. Baloch nation considers the testing of the nuclear bombs as a violation of their heritage and a black day in their collective history.
Pakistan’s policy of nuclear deterrence is part of the Islamic state’s defence strategy to threaten and blackmail its neighbours and the West, and to promote its nefarious designs of regional domination through non-state terror outfits. In furthering its expansionist agenda, Pakistan’s military has also become an enemy of the peoples controlled by the state, committing gross human rights violations against civilian population.
Kindly click on the link below to read the memorandum in full,
https://docs.google.com/document/d/1tzI0ck4yxLbozOKTjMWcN4ctyAHSKB8BtWvyUiASklU/edit?authkey=COGbu8UB&hl=en_US#
Posted by baloch at 3:59 PM