ISI Match (WAR) Fixing to Get $$ in Foreign Aid 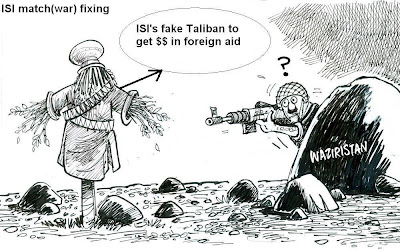 KABUL, Afghanistan — A suicide bomber and rocket fire struck U.S.-run outposts near the Pakistani border as the war in Afghanistan hit the 10-year mark Friday.


No deaths were reported among U.S. service members at the three outposts in Paktika province, and it was unclear if the attacks were timed to coincide with the anniversary of the start of the war. But the continued violence was a reminder of the resilience of the insurgency, which thrives in part because of sanctuaries in Pakistan.
A suicide bomber detonated a vehicle packed with explosives near the entrance to Combat Outpost Margah, which had also been hit with 22 rockets, according to an Associated Press reporter at the scene. Combat Forward Operating Base Tillman was hit with a half-dozen rockets and Forward Operating Base Boris was struck with two.
http://www.tampabay.com/incoming/afghan-war-anniversary-draws-attack-on-us-outposts/1195828
Posted by baloch at 8:12 PM