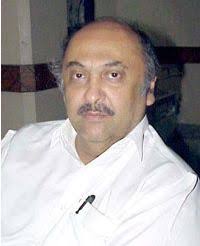 QUETTA (SANA):: The local court has issued the arrest warrant for former Chief Minister Balochistan Jam Muhammad Yousaf who was nominated as the accused in the Nawab Akbar Bugti murder case.

According to police, the arrest warrant was issued by the court of Judicial Magistrate Faisal Hameed on the request of the crime branch investigating the case on Friday. Prior to this, the same court had issued the arrest warrants for former president Pervaiz Musharraf, former Prime Minister Shaukat Aziz and former home minister Balochistan Shoaib Ahmed Nosherwani.
It is pertinent to note that despite the issuance of arrest warrants, no arrest has been made so far.
http://www.sananews.net/english/2011/11/court-issues-arrest-warrant-for-ex-cm-jam-yousuf/
Posted by baloch at 5:44 PM