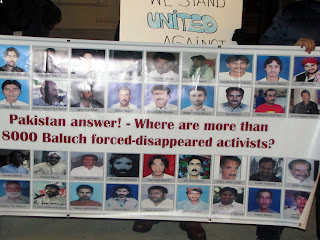 MASTUNG: Two mutilated bodies were found in the Kanak area of Mastung, about 40km off Quetta, on Friday.
According to an official of the Balochistan Levies, some passers-by spotted two bodies dumped in a deserted location in Kanak – the electoral constituency of Balochistan Chief Minister Nawab Muhammad Aslam Khan Raisani – and informed the Levies Station.
The bodies were initially taken to a nearby state-run hospital in Mastung and later shifted to Provincial Sandeman Hospital Quetta for autopsies. The bodies could not be identified.
http://tribune.com.pk/story/360648/two-mutilated-bodies-recovered-from-mastung/
Posted by baloch at 8:18 AM